On Tuesday of this week, I stumbled across an article in the New York Times that announced, “Americans are having less sex.” (https://www.nytimes.com/2017/03/08).  A recent study found that in the last twenty years, sexual frequency of sex has declined for all Americans, but especially married couples (from an average of 67 times per year in 1989, to average of 56 times per year in 2014). 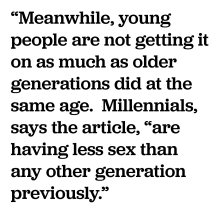 Meanwhile, young people are not getting it on as much as older generations did at the same age.  Millennials, says the article, “are having less sex than any other generation previously.”

The authors of the study could not say why sexual frequency had declined, but guessed it could have something to do with technology intruding into our lives and stealing our attention away from each other.  However, I suspect it is more likely because young women today have been brought up in a feminist era that allows them to feel fine about saying “no” to sex.  In fact, they are pretty much obligated to say no if they don’t feel like it.

Just Do It Anyway

I once suggested to a 20-something family member, worried that her boyfriend would leave her because she hadn’t wanted sex in months, that if she wanted to keep the relationship she might want to “just go ahead and do it anyway.”  She was horrified at the suggestion, and said her boyfriend would never agree to it anyway.  “He would never want me to have sex with him if I wasn’t really into it.”  Okay, then.

I run across feminist advice daily on the internet to girls on resisting the “cultural brainwashing” that tells women they should feel obligated to sexually satisfy boys, and focus on what they really want.  I have seen so many version of this – especially lately in response to the Trump ‘pussy-grabbing’ political flash fire – that the advice has now become its own form of cultural brainwashing.  I have even read essays that suggest sex that happens without our full arousal is basically a traumatic event.

It is one thing to point out that women have the right to determine what happens to their own bodies, but we also need to look beyond that point.  We need to ask what happens to our relationships when we listen only to our own moods, satisfy only our own needs? 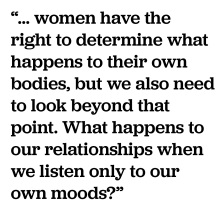 Are women really happier people when they have sex only when they feel like it, regardless of their partner’s needs?  My family member did not seem happy; rather, she felt her entire relationship in jeopardy, and felt something was “wrong” with her that she didn’t want sex often enough.

I quickly find another article on CNN about a study that explores couples who buck the trend of less sex and actually have more sex. So what is it that determines how often a couple has sex?  The study concluded that it is the personality of the woman, and whether she is “agreeable.” (http://www.cnn.com/2016/05/25)

The study’s authors say that because men want, and initiate, sex more often than women, women are by default “the ‘gatekeepers’ of sex within relationships.”  The higher a wife rated on openness to experience or agreeableness (my translation: submissiveness), the more often the couple had sex.  The husband’s personality, on the other hand, was not a predictor of sexual frequency.

My experience of the world (and numerous marriages) tells me that a woman who says “yes” to her husband’s sexual needs, despite her own level of desire, is going to have a happier more peaceful relationship, not to mention she will feel better due to the many health benefits of sex (https://www.alternet.org/sex-amp-relationships).  The result is that she will be happier herself.

Of course, I’m not the only one who’s figured this out.  A quick Google search confirms that in the past few years, more articles are popping up advising women to ignore our feminist cultural conditioning and go ahead and have sex with our partners whether we feel like it or not.  In Prevention Magazine, there is Why You Should Have Sex Even When You’re Not Feeling it.  At YourTango, there is For a Good Marriage, Have Sex Even if You Aren’t in the Mood.  And CafeMom came up with 11 Reasons to Have Sex When You’re Not in the Mood. (http://www.prevention.com/sex), (http://www.yourtango.com/2014228914)

Sometimes these articles point out that merely by saying yes and getting going, we are likely to find ourselves in the mood after all.  They don’t really say why that is so.  But sexually submissive wives know: submission is hot.  Thanks to the laws of sexual polarity, D/s releases a huge amount of sexual energy.  Beyond that, D/s increases trust and intimacy between two people, and grows love.  In this warm, loving conflict-free state, sex will naturally follow… and follow again and again and again.

Author at pleaseravishme.com, a blog that describes the sexual journey of one couple, recently married, who stumble upon the joys of Dominance and submission, written from the woman's perspective. View all posts by CreativeOne 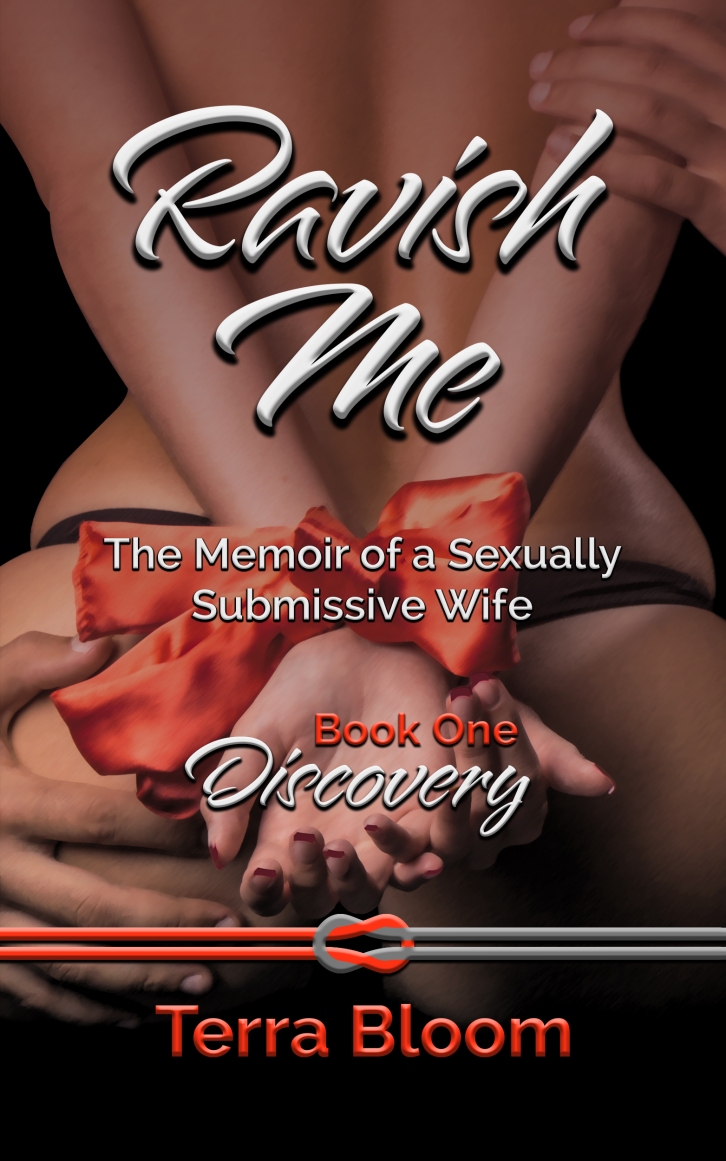