Before my sweet husband and I discovered the joys of Dominance and Submission, we took a quick detour through Tantric sex.  Although perhaps detour is not the right word; Tantric experimentation might have been the actual road to D/s for us.

You see, it was love at first touch for Michael and me.  We met later in life, veterans of unsatisfying and often punishing relationships, our kids grown, not expecting much.  Yet, we found everything in each other, and with a feeling of great giddy celebration at discovering each other, we got naked and jumped into bed, very, very frequently.

Yet surprise me my new, supposedly less experienced lover did.  Or perhaps it is more accurate to say, we surprised each other.  My openness and “I want to try everything with you” attitude was unlike anything he’d experienced with the conservative, no-that’s-gross women of his past. And his lack of judgment toward me and my sexually varied history was unlike anything I’d known from the jealousy-based, how-could-you-have-done-that men in my past.  With such a sense of freedom and safety with each other, we felt spiritual stirrings in our lovemaking.  And we’d lie in each other’s arms in the afterglow, talking about wanting to hone that feeling, make it more explicit.

I had been introduced to the idea of Tantric sex in the past, but never really practiced it in a determined way.  But six months into my sex-soaked relationship with Michael, I became determined and bought a bunch of Tantric DVDs.  We watched a few of those, and gave some of the exercises a try.  Staring into each other’s eyes, and synchronizing our breathing was… sweet.  Yes, some of it felt slightly silly but it was also romantic. Why not go a little further?  I did a Google search for workshops.   I found an evening seminar called “Sacred Sexuality:  An Introduction to Tantra.”

“Want to try this with me?” I asked Michael.  I showed him the class advertisement on my laptop screen.   In answer, he grabbed my hand and put it on his growing erection.  My enthusiastic lover was game for anything.  I paid the $170 to register us for the class.

When the teacher sent us a welcoming email that offered us “Bright Rainbow Blessings,” we laughed, entertained.  When the day arrived, we drove hours through Northern California traffic to get there, and an old hippie directed us down a long drive that snaked through thick foliage to park our car.  About thirty people were enrolled, most of them around our age. Almost as if not to disappoint the New Age stereotype, a large carpeted room waited for us, empty except for floor cushions, and Zen-like with the smell of incense.  A cat roamed in and out.  I was giggly and excited and nervous as we all sat in a circle on the floor.

The teacher, probably somewhere in her 60s, began by showing us how she could bring herself to orgasm with her mind.  She sat cross-legged on the floor, then said, “Here we go.” 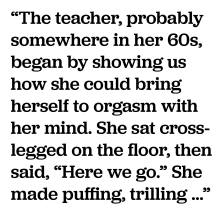 She made puffing, trilling noises, rocking back and forth with her eyes closed, then claimed success.  The rest of the class, centered on loudly “raising” our sexual energy with the same forceful breathing and pelvic rocking, felt… decidedly unsexy to me.  And the breathless fake orgasm sounds struck me as absurd.  I could not take it seriously, and spent a good portion of the class hiding in the hallway, feeling vaguely threatened by the overzealousness of it all.

Next, we attended a “spiritual sex” lecture based on the teachings of a writer I never heard of, named David Deida.  A lecture better suited me, the role of student, sitting in a chair, listening, detached.  But when the class leaders talked about the energy of sexual polarity, how the feminine “surrenders” to the masculine, how “equal 50/50” relationships lead to bland, uninspiring sex, I bristled.  First, Michael and I were having anything but bland sex.  Second, I considered myself a feminist, fiercely independent, and probably more on the dominant side than the submissive.  In fact, early in our relationship, I talked Michael into letting me tie him up and whack him with a paddle, a little BDSM game that had made a previous partner of mine melt in ecstasy and beg for more.  Michael thought it “kinda fun,” but never asked for a repeat.  I thought, too bad, he’s probably still a little too uptight to let go.  Not once did it occur to me that maybe he was not suited to be submissive.

Still, despite the politically incorrect description of raising sexual energy, I found the lecture interesting, and when I got home ordered several books by David Deida, which I put on my shelf without reading.  But I also found myself on the organizer’s mailing list and received an invitation to another Tantric class, this time on genital massage for a man.

“What do you think of trying this?” I asked Michael.  He grabbed my hand and placed it on his erection.

This class was held in someone’s living room, mostly empty of furniture, again filled with floor cushions, and taught by a warm, long-haired woman with a spacey air and girly laugh.  We were treated first to a live demonstration on a brave man willing to lie naked in front of us strangers while she “massaged” his penis.  The teacher spoke throughout, as would any anatomy teacher, and we all watched with studious looks.  At least there were no strange noises to send me scurrying into the hall.

After a break, it was time for the men to strip, and most of the women took off their tops off in solidarity.  I did not.  I stayed fully clothed, back against a wall, trying to pretend I did not notice all the other naked men around me.  I was impressed at Michael’s lack of self-consciousness as I covered his cock in coconut oil, then followed the instructions.  For the next half hour I practiced moves like “The Corkscrew,” and “Around The Clock” on his very, very hard cock.  His favorite was when I placed my fist under his balls and vibrated it. His eyes grew wide in surprise, he began to moan and writhe.  I knew he was on the verge of orgasm, but he kept control.  Afterward, we laughed all the way home, and had ourselves a good, hot time in bed.

We went back a month later to do the genital massage “for her” class, throughout which I secretly sipped vodka from a water bottle to help me get up the courage to strip down in front of strangers. 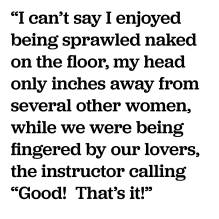 Entertaining, if a Little Strange

Overall, our Tantric explorations were highly entertaining, if a little strange.  Yet, after several months of the classes and watching DVDs and trying different exercises, the promise of transcendent sex remained unfulfilled for me.  (Well, except for that pussy-stirring revelation.)  Mostly, I felt like I was missing something which all the other Tantric explorers we met, with their easy nakedness and beatific smiles, seemed to get.  Slow, voluptuous Tantric union, while lovely to me in theory, just didn’t do much for me in actual practice.  The exercises felt forced, even a little boring.  And I was more disappointed in our explorations than I let on.

So that’s it, I thought, we’d gone as far as we could go into sexual experimentation.  Today I laugh when I remember that.  We think that by mid-life, we really know ourselves, know exactly what makes us tick.  Actually, we don’t just think we know, we are certain of it.  Even with dozens of sexual relationships and experiences behind me – including a BDSM relationship in which I acted as the top (acting being the operative word) – I had very little inkling of what might truly open the door to ecstasy for me.  Even after our little spanking role play, I still had no clue.  At least my conscious mind had no clue.  My subconscious sexual awareness, however, had just been smacked awake. 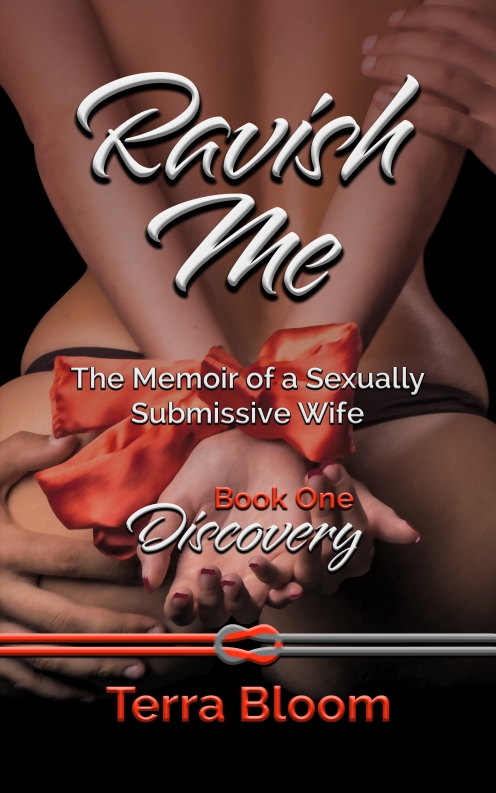