The other night as I headed into our bedroom, I found my darling Daddy Husband watching the James Bond movie, Live and Let Die.  Like many men, he loves watching the obviously dominant James Bond seduce sexy women into submission.  As I looked at the screen, I said something about how young Jane Seymour was in that movie – a little young for the much older Roger Moore, I thought.

“That’s not Pussy Galore,” I said.  “That’s not her name.”  (For the record, Jane Seymour played Solitaire.)

“They’re all Pussy Galore to me,” he said.

I felt a flash of knee-jerk anger, which I hid behind a laugh.  “Really?” I asked.  “You watch all these Bond movies, and can’t be bothered to learn their names?  All those women, they’re all basically just pussy to you?”

He tilted his head back and forth, which I interpreted to mean, Yeah, pretty much.

I felt myself filling up with a righteous rant, but before I could speak the first word, I realized how silly it would be to blame him for looking at women as sexual objects when I have openly encouraged him to treat me as one.  As in, I literally do not want him to seek my consent, but treat me as a sexual object for his gratification.

He has taken me up on this with great enthusiasm over many months now.  A few weeks ago, he told me how much he enjoyed grabbing my head and forcing my mouth down on his cock to his preferred rhythm.  “It’s like you’re not even there,” he said.  “It feels like the essence of using you.”

This is not an easy time to come to terms with my appetite for sexual surrender, let alone write about it in this blog.  In fact, I haven’t written about it for many weeks now as the year-long storm of media attention toward sexual harassers has reached a fever pitch. 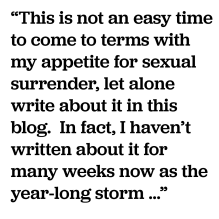 It started last year with Donald Trump’s Access Hollywood tape about his zeal for pussy-grabbing, and has continued on through Roger Ailes and Bill O’Reilly losing their jobs for their own zeal.  And lately with Harvey Weinstein and others being outed as perverts who prey on women, I cannot go on Internet without running into one anguished tale after another.

Lately, when I sit down to write another detailed description of our latest D/s bedroom exploits, I feel myself freeze up with… I don’t know, some kind of guilt, or… Is it a feeling of complicity?  In writing about how much I crave objectification from my husband, I worry terribly I could be abetting the sexual harassers who seem to be making so many women miserable in the workplace and in their lives.

I can, of course, point out that I only desire to submit to my husband, not just any male who crosses my path.  I can point out, as every BDSM practitioner does, over and over, that the entire dynamic requires clearly stated consent. And I can point out that in exchange for my submission in the bedroom, my husband has become my fierce protector, and treats me with extraordinary care and respect in all other areas of our married life.  And I have no doubt that – despite his joke about Pussy Galore – he does not look at womenkind as nothing but a bunch of sexual receptacles.

But none of that would hide the fact that I really, really crave being a sexual object for him.  And that most of my life I have sometimes enjoyed the little frisson of energy that comes from being viewed as one by others.  I don’t know if that is primarily a biological urge (certainly sexual attractiveness must have played a big part in our species’ survival through the imperative to procreate), or if I have been trained to it by the culture, or both.

What I do know is that after a wretched adolescence in which I was completely ignored by boys, I came to feel there was nothing so painful as being invisible to the opposite sex.  Since growing into my body, I have always dressed up for parties hoping to be flirted with and lusted after by other men.  I have gone home disappointed if that didn’t happen.  And I confess that I have often implicitly encouraged workplace sexual attention through laughter at inappropriate jokes and remarks, and even the acceptance of the odd groping here and there.  Rather than making me feel victimized, it somehow always made me feel like I was wielding power over these hapless men who could not control themselves around me.

I learned this attitude from a mother who dismissively waved away any idea of sexual attention as “bad.”  As a 12-year-old with brand new breasts, I’d been cornered by one of her friends in our bathroom, and grabbed and pulled tight against him.  I watched in the mirror as his face went slack and his hands roamed over my chest. When I told her about it, she didn’t get outraged.  She told me “boys will be boys,” that’s how they were, and I could expect some of them would try to get handsy with me.  She told me she’d warn him off, but that I might as well be “flattered” he found me attractive.  Oh, okay then.

Now, there have been times in my life when I have felt anger at my mother’s dismissal of what was clearly sexual abuse.  But most of the time I believe she did me a great favor, teaching me that I can interpret such events any way I choose.  And so, when I began working in a field where men far outnumbered women, I chose to not feel victimized or even uncomfortable, despite all manner of inappropriate words or actions.

I laughed a lot, made good friends, felt part of a team, and was generally known as “cool chick” for my lack of uptight censure of them.  Not that I didn’t sometimes pay a price for my tolerance of bad behavior.  When a male supervisor made up stories about getting me in the sack, those stories that were believed.  And if I had ever been raped, I suspect the consensus among at least some of my coworkers might have been that I had somehow asked for it with my easygoing attitude.

Would they have been right?  If a woman doesn’t set up hard boundaries against being cast in a sexual light, is she inviting abuse?  Worse, is she failing to protect all other women who have been — or might in the future be — grievously harmed by abuse?  Most of the commentary I see online lately is very black and white, as if the answers are obvious.  Women are victims and men are predatory pigs.  And when it comes to a true predator like Harvey Weinstein, and the women who suffered at his hands, a black-and-white picture is right and necessary.

But most of life unfolds in gray areas, and it strikes me as unhelpful to pretend otherwise.  The determination of where sexual power lies, at least since the sexual revolution, is not at all black and white, but murky, and fraught, and complex.  Men have generally struck me as beggars for sex, made biologically desperate by their stronger need, and sometimes sadly comical in the way they will bow and scrape in order to “get some.”  I’ve seen plentiful signs that many men resent their lack of power in the sexual arena, and so when they find themselves in a position of power in the workplace, some are clearly willing to use that power toward a sexual end.  A few even make criminals of themselves.  But I think it’s fair to recognize that men can be confused by mixed signals, such as the way women dress to invite sexual admiration – a point which fashion designer Donna Karan recently made and was immediately punished for in the court of public opinion.

But of course, women are beggars for power where they can get it, and sexual power is easier to come by than any other.  We like to blame the culture for making women into sexual objects, but no one forces girls to put on short skirts, or show off our cleavage, in order to invite the male gaze.  We do it, I believe, because it makes us feel a certain kind of power.  And certainly, many men must have also found that while some women are offended by workplace sexual attention, others overtly welcome it.  Or even if they don’t actively court it, many are willing to brush it off without being unduly disturbed.

Just this week in The Atlantic, a writer talks about working for years with a magazine editor who was well-known for his sexually inappropriate manner with the women who worked under him.  She tolerated it without too much trouble it seems, and even felt fortunate to be working with him for other reasons.  But now she – and other women who also worked there – regrets that tolerance.  She writes that many of them are feeling “guilt-ridden” and complicit, “for not having been stronger or braver; for not having stood up for themselves and demanding more respect.”  Why didn’t they?  Because, she says, it was “complicated.”  Meaning, it wasn’t a black-and-white situation, it was gray.

I have read again and again that we are no longer supposed to say, “boys will be boys,” and give them a pass for bad behavior.  This has been important in dealing with black-and-white crimes, but it has been disastrous in the gray areas we navigate every day.  I worry we have taught ourselves and our daughters to feel traumatized by any and all sexual attention, and at the same time, cast a net of shame over men for seeing women through a sexual lens.  A quick look at social media shows how many men feel angry and alienated from women because of it.  I think they instinctively know it’s not just a “men are assholes” problem, it is also a “women want it both ways” problem – and this blog reveals that.

And that’s where my guilt comes from, because I’m not supposed to admit it.  I’m not supposed to admit that I want to be wanted in a sexual sense by men just as much – if not more – as I want them to respect me for my work.  But, if we humans really are subject to a hierarchy of needs, as many psychologists suggest, then our biology-driven need for sexual regard and connection, however we define it for ourselves, is always going to be more urgent than other legitimate “higher” needs.  (Hence, the downfall of so many prominent figures because of tawdry sexual entanglements.)

From where I sit, one reason the problem of sexual harassment has become so charged is because we do not allow ourselves to tell this whole complex gray truth about it.  Perhaps that is why I am so drawn to, and so comforted by, sexual submission in my marriage.  I have always found peace and pleasure in understanding that boys will be boys, and being willing to relate to them on that level.  It feels simple and honest, everything out in the open.  My husband wants pussy galore, and I consent to let him have it and don’t make him feel badly for it.  I give my sexual power over to him, and finally oh finally, there are no more layers of confusion to get in the way, no more guilt, or resentment, or conflict between needs.  Just two bodies and raw sex.  Just sweet uncomplicated fucking.  And somehow from that flows the richest spring of love and respect I have ever known.

So… politically incorrect or not, I have decided I will keep writing about it.

2 comments for “Pussy Galore; Or, Why Do I Want to be His Sexual Object?”