My husband has left on a business trip for five days.  Five long days.  “Daddy’s aren’t supposed to leave,” I pouted just before he left.  Yes, he said with a laugh, I’m a bad Daddy.   No, no, no, I said as I pressed myself close.  You’re the most perfect Daddy there ever was.

It’s becoming easier to call him that, mostly.  The word still strikes me as silly, but the cherished feeling it represents is anything but silly.

We have decided that while he is gone, we will come up with a real contract we can sign when he gets home.  One thing we know from our online searches and reading is that we really should have some kind of contract to formalize our D/s relationship and sets out boundaries.  So after Michael’s first “rough draft” of a contract he sent me, we are making attempts at revising it.

We accept as a given that we must do this.  This is where I declare in writing what I am willing to let him do to me, and what I will not let him do to me, so there is no confusion.  A contract is one of those things that BDSM people boast about, proof that the D/s relationship does not undermine the submissive’s rights, but rather honors her needs and desires.  It is a symbol not only of consent, but also of the deep communication that must happen between dominant and submissive before entering such a potentially perilous arrangement.  How many vanilla people are willing to discuss their desires so thoroughly, they say.  How often do women so explicitly state what they like and dislike?   Although I have not seen the 50 Shades of Grey movie yet, I’ve read there is a cute scene in which the main characters negotiate terms across a conference table.

As I think about what the contract should say, I begin by contemplating my limits, and …  I immediately come up blank.  I cannot think of what my boundaries might be.  Okay, obviously ‘no bestiality,’ but it would be ridiculous to say that, because it would imply Michael might suggest such a thing. 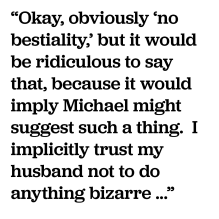 I implicitly trust my husband not to do anything bizarre or dangerous to me, to know the difference between pain and harm.  He is a good person, he loves me, I don’t feel the need to protect myself from him and his desires.

I toy with writing “no humiliation,” or “no golden showers,” things that do not appeal to me.  But I reject those as well.  How do I know if such things should be a boundary if I haven’t tried them yet?  So far, I have surprised myself by liking things it never occurred to me I’d like, just about anything has felt good and exciting and even enlightening in the right context.  One of the things I most love about our D/s exploration is how we have been crossing normal boundaries and the liberation I feel when they fall.  Ultimately, I declared myself submissive because I don’t want choices in sex, and so I find myself getting nowhere in trying to come up with my limits.  I very much want him to decide the limits.

I go online to see what other people write in their D/s contracts.  I read page upon page about how to negotiate the rules for setting up “scenes,” a framework for BDSM “play,” with a repeated focus on the concept of “Safe, Sane and Consensual.”  This seems it might be appropriate for people who don’t know each other very well getting together for some hot sex, but what about for married people who have already established great trust with each other and want to throw caution to the wind in order to expand their love?  I certainly am not doing this to protect my choice, or to stay safe or even necessarily sane.  I want to risk everything for my husband, go crazy with over-the-top love for him.

Of course, on one hand, I can see how it might be helpful to set up a framework that helps one know when to behave a certain way.  And I can get the value of that, bracketing the SM in a specific scene with beginning, middle and end.  I know Michael and I have been at a loss sometimes in these first months, we aren’t quite sure how to move in and out of dominant or submissive behavior, we stumble and fumble, is it time for this now?  What do we want to do?  How do we live normal life and this other life at the same time?

On the other hand, talking about scenes and play seems to attach a sense of artificiality to our power exchange, as if it is all one big game.  We are not “playing” in bed, we are making love.  Or as Deida would say, we are “serving love.”  If I have learned anything these past weeks, the spiritual deep love dimension of our D/s unfolds spontaneously, unplanned, no scene.

I give up on thinking about limits and rules.  I decide the purpose of our contract should not be about limiting our D/s interactions, but about how to better open the door to the D/s dynamic.  How to keep him in a dominant mindset and keep me in a submissive mindset.  I think of all the things that might make me feel submissive:  being on my knees, being tied up helpless, being over his lap, exposed and vulnerable, daily spankings …  I make a list of these things, and email them to him, then immediately regret it.  I realize how it sounds like a list of demands from me, requirements of him.  It is nothing less than topping from the bottom.  And I really don’t want that, don’t want to have to judge and analyze whether my desires are being met, don’t want to have any choices at all.

I write to apologize, he writes back that it’s fine, he wants to know my desires.  And while he has no trouble thinking up what he might want to do to me, he also doesn’t see why it should be written in a contract when he can just do what he wants in the moment.   We decide to revisit the idea of a contract later, when we have a better handle on what it should say.

Only in the weeks and months that follow, we never do write a contract.  We simply trust each other, and allow the dynamic to unfold spontaneously as it has from the very first day.  Maybe one day we will figure out how to write the perfect contract for us, but so far we have managed to be in perfect agreement without it.  Lucky us.

← Opening the Gate; Or the Tantric Art of Pussy Stirring
Sexual Submission is Easy; Dominance is Hard. Sort of. →